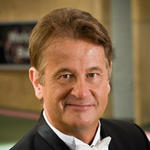 Dr. David M. Booth is professor of music and Director of Bands and Wind Conducting Studies at Wright State University, where he serves as music director and conductor for the Wright State University Wind Symphony and Chamber Players, and instructs courses in graduate and undergraduate instrumental conducting and wind music repertoire.  Prior to his WSU years, Dr. Booth served in similar faculty positions at Indiana State University and the University of Oregon.  Throughout his career, ensembles under his direction have performed at numerous state, regional, and national conferences, including Western International Band Clinic (WIBC), MENC Northwestern States Divisional Converence, and several state conferences of the Ohio Music Education Association, Montana Education Association, and Oregon Music Educators Association.  Under his direction, the Wright State University Wind Symphony has conducted several regional and international performance tours, including tours to Japan in 2000 and 2004, respectively, and in 2013 was selected to perform at New York City's world renowned Carnegie Hall.

David Booth earned his doctorate in instrumental conducting at the University of Oklahoma under the tutelage of his primary conducting mentor, William K. Wakefield.  Upon completion of his doctorate in 1994, he was awarded the Oklahoma School of Music’s coveted Gail Boyd de Stwolinski Award for meritorious scholarship and musical performance achievements.  He has since become well-known for his dissertation, An Analytical Study of David Maslanka’s "A Child’s Garden of Dreams," which has drawn praise from the composer himself.  In the 1990s, as a visiting scholar at the University of Michigan School of Music, Dr. Booth pursued post-doctoral study in wind conducting and repertoire with renowned conductor H. Robert Reynolds.  Other conducting mentors have included R. Wayne Bennett and Melvin Shelton.  Baccalaureate and masters degrees were earned at Boise State University (1979), and the University of Oregon (1987), respectively.

Originally a native of the Pacific Northwest, Dr. Booth has taught at all public school levels in the states of Idaho, Oregon, and Montana, and during the 1980s became particularly known for achievements with the award-winning Sprague High School Band program of Salem, Oregon.

Having conducted extensively throughout the United States and Japan, Dr. Booth continues to maintain an extremely active schedule as a guest conductor and clinician for various semi-professional, collegiate, community, and high school ensembles, and remains active as a featured conductor for various inter-collegiate and high school honor bands across the country.  His professional affiliations include his having been elected and inducted into membership with the prestigious American Bandmasters Association (ABA).  Other affiliations include College Band Directors National Association (CNDNA), National Association for Music Education (NAfME), Ohio Music Education Association (OMEA), and the National Band Association (NBA).  Dr. Booth also has been recognized and awarded with lifetime memberships in Phi Mu Alpha Sinfonia, Phi Beta Mu, and Pi Kappa Lambda Music Honor Society, and his profile appears within several internationally published Who’s Who indexes.  Along with the rigorous pace and demands that accompany a dynamic artistic life, Dr. Booth avidly pursues such hobby interests as studying the Spanish language and hispanic culture, and traveling throughout the United States, Latin America, and abroad.