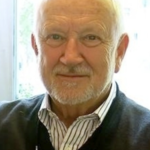 An internationally recognized expert in appled mathematics and in aircraft aerodynamics, aeroelasticity and structural dynamics.

Career in Industry and Government

1975 - 1987: USA Leader for the Structures an Materials Panel of the NATO Advisory Group on Aeronautical Research and Development (AGARD);

Adjunct Professor at Wright State University, the University of Dayton and The Air Force Institute of Technology

Mathematics for the Modern World

The University of Arizona

The University of Rome

The University of Pisa