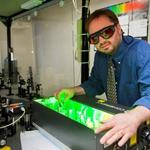 Jason A. Deibel is currently an Associate Professor and Chair of the Department of Physics at Wright State University. From 2014-2016, he served as the Director of Undergraduate Research and Experiential Learning for the College of Science and Mathematics. For the 2015-16 academic year, Dr. Deibel also served as the Interim Associate Director for the Interdisciplinary Applied Sciences & Mathematics (IASM) Ph.D. Program.

Prior to joining the faculty at WSU in 2007, he was a Postdoctoral Researcher at the Department of Electrical and Computer Engineering at Rice University where he was a Director of Central Intelligence Postdoctoral Fellow. During this time, he also spent two months at the University of Leeds as a Royal Society Visiting Fellow. Jason completed his Ph.D. in Applied Physics from the University of Michigan, Ann Arbor and also holds a B.A. in Physics and Mathematics from Transylvania University. His research interests include ultrafast and terahertz spectroscopy and imaging, computational electromagnetics, and the characterization of novel materials. His work has been published in over 35 refereed journals and conference proceedings. A significant number of these publications have included undergraduate co-authors. Jason’s research has been funded by the National Science Foundation, the Ohio Board of Regents, and the Air Force Research Laboratory as well as several private research and development companies. Jason is also committed to advancing his teaching via the implementation of active learning strategies in the classroom. He is a member of the IEEE, OSA, AAPT, and APS as well as the Council for Undergraduate Research.

Recognition for Faculty Contribution to the Writing Across the Curriculum Program at Wright State University (Nominated by students), April 2013