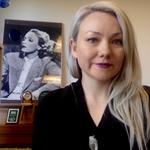 Dr. Nicole Richter is Head of the Tom Hanks Center for Motion Pictures at Wright State and Professor of Film Studies. She is a leading international film scholar whose research focuses on women and queer cinema. She is the author of the textbook The Moving Image: A Complete Introduction to Film.

Her work has been published in numerous journals and edited collections, including the Journal of Bisexuality, Short Film Studies, Feminism at the Movies, Queer Love in Film and Television and The Films of Wes Anderson. She is the founder of KinoFemme and KinoQueer, respectively women’s filmmaking and queer filmmaking collectives. She teaches a wide variety of media studies courses including philosophy and film, cinema and sexuality, animation, feminist film theory, and film history. She received the College of Liberal Arts Outstanding Teaching Award and the university wide Faculty Diversity Advocate Award from Multicultural Affairs and Community Engagment in 2016. She serves on the editorial board for Short Film Studies and formerly served as President of FilmDayton.