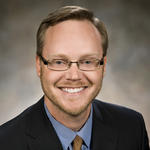 Bauguess was hired by Wright State as a public relations strategist in 2010 after spending ten years in local television news. In 2015, following an external search, he was hired as director of the newly-formed Office of Communications.

In 2015, Bauguess developed a brand journalism-driven, media relations strategy and deployed a measurement system to track the results. That plan has delivered a measurable increase in positive external news coverage for the university. Media monitoring services external to the university have observed an estimated positive publicity value of $1.62M in FY16, $1.88M in FY17, $2.07M in FY18, $3M in FY19 and $2.1M in FY20. (These totals reflect the external media coverage created by the day-to-day ouput of news content from the university's newsroom, which is managed by Communications. They do not include the university's athletics-related earned media or earned media from notable, one-off news outliers like Tom Hanks' viral COVID graduation message to Wright State arts students or a Wright State student competing on the game show Jeopardy!. ) The day-to-day positive earned media generated from Communications has increased each year since Bauguess became director. Uncharacteristically high negative earned media in FY19 has already been followed by stark improvement and gains in positive earned media in the first half of FY20.

Innovations from Communications since Bauguess became director include:

Bauguess is responsible for oversight of the Wright State University Newsroom—the university news website and digital content engine that produces about 500 original content news stories and videos each year. They are disseminated across numerous university webpages and social media platforms and many are pitched to the media. Content creation at that volume results in about 2,000 positive news stories each year about Wright State and its people. The number of Newsroom stories the office has produced has increased each year since 2015 and reached an all-time high of 550 stories in FY20. Writers from Communications create many of the stories used in the university's alumni magazine.

Communications is also responsible for sending nearly 500 all-campus, university-level emails each year and is an engaged partner in many high-profile university-wide strategic initiatives, and committees.

2017, graduated from Wright State's inaugural class of Wright Leader Academy, a cohort-based certificate program designed for Wright State faculty and staff who have been identified by their superiors as being ready to move into a position of increased leadership within the university.

2013, earned MBA from Raj Soin College of Business at Wright State and was inducted as a member of Beta Gamma Sigma, the international business honors society.

2010, transitioned to Wright State following a career in local television news as news reporter and anchor.

2007, named News Employee of the 4th Quarter for remote coverage from North Carolina of the Maria Lauterbach story, the missing Marine from Vandalia

2003, named Kentucky Colonel for stories that advocated for the fiscal protection of state jobs in the Commonwealth of Kentucky for adults with physical and mental disabilities.

2001, earned BFA in electronic media from the University of Cincinnati College Conservatory of Music.

Once upon a cure