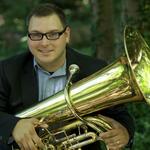 Instructor of Tuba-Euphonium and Coordinator of Brass Chamber Music

Recent solo engagements include the performing of Michael Daugherty’s Concerto for Tuba, Reflections on the Mississippi, with the Mason High School Wind Ensemble at the National Concert Band Festival and Cincinnati’s Music Hall, and the premiering of his work At the Mountains of Madness for Tuba and String Orchestra with the Wright State University Chamber Orchestra. As a recitalist, Dr. Darling has appeared at the University of Akron, University of Wisconsin-Platteville, University of Northern Iowa, Marian University, and in 2018 was honored to give his Carnegie debut at the Weill Recital Hall. An active member of the International Tuba-Euphonium Association, Steven has performed at the Midwest, Southeast, Northwest, Great Plains, and International Tuba-Euphonium Conferences.

Is this you? Log in to update your profile.
Attachments: