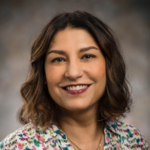 Alpana Sharma is professor of English and chair of the School of Humanities and Cultural Studies in the College of Liberal Arts at Wright State University in Dayton, Ohio. She received her Ph.D. in English from the University of Pittsburgh and taught at the University of Delaware and University of Nebraska-Lincoln before joining Wright State University in 2000. She has edited a collection of essays on American immigrant literature titled New Immigrant Literatures in the United States and a special issue of the journal South Asian Review on the topic of South Asian modernism. Her scholarship on South Asian writers, post-colonial literature, and Indian cinema has appeared in academic journals ranging from Modern Fiction Studies and Quarterly Journal of Film and Video to South Asian Review and Literature/Film Quarterly. She has also published poetry in the journals Postcolonial Text and Journal of Postcolonial Writing. Her essay, "Intimations of Modernity: The Legacy of Toru Dutt," appeared in the Modern Language Association's Options for Teaching Series, Teaching Anglophone South Asian Women Writers, in August 2021. Alpana Sharma has served on the Executive Committee of the South Asian Literary Association, an allied organization of the Modern Language Association, and is on the editorial board of the journal South Asian Review. She is an MLA Delegate for the Great Lakes region, a term ending in 2024. At Wright State University, she teaches courses in non-western literature, Anglophone world literature, Asian diasporic literature, South Asian women's literature, post-colonial literature and theory, and Indian cinema.