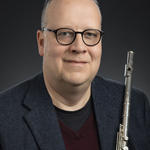 Christopher Chaffee is Professor of Flute and Director of Graduate Studies in Music at Wright State University. A Yamaha Performing Artist, he is a frequent guest artist and clinician at high schools and universities across the United States, and serves on the flute faculty at the world-renown Interlochen Arts Camp.  Dr. Chaffee is a recording artist and blogger with New York City based Open G Records, and his 2015 album Four Prayers is available worldwide and is in regular rotation on numerous NPR stations. His students have recently earned prizes in the Central Ohio Flute Association, National Flute Association, WDPR Talent Search, and Clark Haines Memorial competitions.  Former students have earned faculty positions at universities and in orchestras across the US, occupy solo chairs in prestigious military bands, and have continued their studies at elite music schools such as Eastman, Colburn, and Michigan.

Dr. Chaffee is an Arts Education advocate and non-profit leader. He is a member of the Board of Directors of the Ohio Alliance for Arts Education, Past President of Chamber Music Yellow Springs, and former Chair of the Chamber Music Yellow Springs competition, which grew to international acclaim under his leadership.  He was appointed by the Ohio Department of Education to serve as a member of the 2019-20 Ohio Fine Arts Standards Revision Advisory committee.

Christopher is an honors graduate of the Interlochen Arts Academy, where he was a four-year scholarship student. He received his BM from Eastman School of Music, MM from Michigan State University, and DMA from University of Cincinnati College-Conservatory of Music.  He also received further orchestral and solo training as a full scholarship student at Brevard Music Center, Boston University Tanglewood Institute, and the Bowdoin Summer Festival.  His teachers and mentors are Bonita Boyd, Richard Sherman, and Jack Wellbaum.