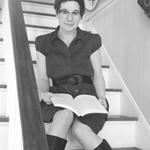 Crystal B. Lake completed her PhD in 2008 at the University of Missouri, specializing in eighteenth- and early nineteenth-century British literature and culture. She joined Wright State in 2011, after completing three years as a Marion L. Brittain Postdoctoral Fellow at the Georgia Institute of Technology. Broadly speaking, Crystal's research and teaching interests explore the relationships between literature and material cultures in England between 1660 and 1837. Her work has been published in ELH, RES, and Modern Philology, among others, and she has been awarded research fellowships from the Yale Center for British Art, The Lewis Walpole Library, the Centre for the Study of Early English Women's Writing at Chawton House, and CELIA. Additionally, Crystal received Wright State's Presidential Early Career Achievement Award in 2013. Crystal offers courses that introduce students to British literature as well as advanced, special topics courses for majors and graduate students. Recent topics include "Two Hundred Years of Pride and Prejudice," "The Age of Something: Eighteenth-Century Material Culture and the Rise of the Novel," and "Frivolity: A Literary History of Eighteenth-Century Excess." Crystal also teaches courses in Great Books, with a special emphasis on creating innovative classroom enviornments that invite students to develop their own reading lists and to explore the "gamification" of literary study.