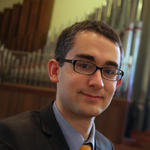 David Crean is an instructor of organ and harpsichord at Wright State University, and University Organist at Wittenberg University. A native of New York, David received his D.M.A. from The Juilliard School, where he was the 2014 recipient of the Richard F. French Doctoral Prize. He also served as adjunct faculty at Juilliard and holds degrees from Oberlin Conservatory and The University of Iowa. He has concertized throughout the United States and Australia, where his programs have drawn praise for their balance, accessibility, and diversity. In March 2014 David made his second concert tour of Australia featuring performances in Albury. Goulburn, Canberra, Sydney, and Bowral. The tour was supported by a generous cultural exchange grant from the US state department. Other recent highlights include the opening recital of WQXR’s “Bachstock” organ works marathon, performances on American Public Media’s Pipe Dreams, the Australian premiere of Henry Martin’s Prelude and Fugue in E minor, and the American premiere of Ecce Lignum Crucis by Polish composer Marian Sawa for Juilliard’s acclaimed Focus! festival. David's former teachers include Paul Jacobs, Lionel Party, Greg Hand, Delbert Disselhorst, and David Boe. An avid writer, David is in demand as a program annotator and has supplied liner notes for a Grammy-winning CD. His dissertation focused on the life and works of Samuel P. Warren, organist at New York’s Grace Church in the 19th century. Additional articles have appeared in Notes: the Journal of the Music Library Association and The American Organist.