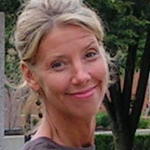 Deborah Thomas, a proud member of VASTA (Voice and Speech Trainers Association), teaches vocal production, speech, dialects, classical text, and voice-over technique. She has served as voice, speech and dialect coach for every departmental production since the Fall of 2008. She also serves as Vocal Production Coach for Dayton’s The Human Race Theatre Company, where her credits include LEND ME A TENOR, THE 39 STEPS, OLIVER!, WAIT UNTIL DARK and the world premiere of Michael Slade’s UNDER A RED MOON.

A summa cum laude graduate of Boston University, Deborah studied voice and speech with Robert Chapline, a participant of Kristin Linklater’s first voice teacher training program in the U.S.  At Virginia Commonwealth University she studied with Janet B. Rodgers and taught Voice, Speech, and Acting along with coaching various productions.
A resident of New York City for nearly twenty years, Deborah has acted Off-Broadway and in regional theatre. She has performed at such theatres as Westside Repertory, The Mint Theatre, The Pearl Theatre Company, The Huntington Theatre Company, Lyric Stage, The New Boston Theatre and The Open Door Theatre in roles that included Rosalind in AS YOU LIKE IT, Portia in THE MERCHANT OF VENICE, Raina in ARMS AND THE MAN, Marianne in THE MISER and the title role in ANTIGONE. She was featured in numerous radio dramas which were performed and broadcast before live audiences at the Museum of Radio and Television’s Mark Goodson Theatre in New York City. Deborah has also done commercials and voice-overs. NYC vocal coaching credits include THE CRUCIBLE produced Off-Broadway at the Arclight Theatre.
Deborah’s written work includes her one person show B-DAY (produced at Westside Repertory) and a series of vignettes for SEPTEMBER 11-A TRIBUTE, produced by Stage Shadows as part of The Museum of Television and Radio’s Annual Radio Festival.