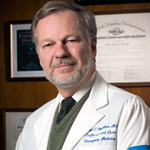 Emergency medicine has been my academic career for 30 years. After an insightful mentorship by Peter Rosen, M.D., at Denver General from 1977-79, I joined the University of Cincinnati faculty as education director. Moving to Wright State in 1981 to become department chair, I also served as program director until 1989. It remains easy to say "opportunities continue to abound." We assembled a talented group of faculty who are dedicated to academic emergency medicine. The focus of the department has always been education of medical students, residents and faculty. A new and necessary direction is medical readiness. In 2009, I stepped out of the Chair's role, became Vice-Chair and focused my energies on building a new disaster-oriented "theme park" - Calamityville, or more formally the National Center for Medical Readiness-Tactical Laboratory.

My family - Lynda (M.M. Music), James (M.D., M.B.A., Ohio State), Kate (M.S., Yale), and Elizabeth (Oakwood High School) - and I have traveled far in Dayton. We've raised our family in a supportive environment with friends and colleagues. The Miami Valley has been a true home to us for much of our lives.

My personal lifelong pursuit is to become a Doctor of Motors - 1935 and earlier. Anyone who can identify the car in the photo (below) has my utmost respect! Hint: It's not American, but has 4-speed synchromesh transmission, and independent front suspension. An added hint: its original mascot was prey, but then became predator. You'll never guess as it was the only one in the United States of 29 made and six remaining, but you'd enjoy the drive!