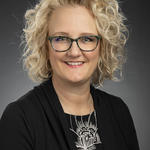 Dr. Gretchen McNamara is the Senior Lecturer of Trombone and Music Education at Wright State University in Dayton, Ohio, a position she has held since 2007. In addition to her responsibilities with the trombone studio, she also teaches instrumental music education classes and supervises field placements. Dr. McNamara has presented clinics (2012, 2013, 2015) and performed as a member of the Wright State University Faculty Brass Quintet (2009) and Wright State University Chamber Orchestra (2012) at the Ohio Music Education Association State Conference. She has been a featured artist/clinician at the International Trombone Festival (2021, 2019, 2014); Midwest Trombone and Euphonium Conference, Charleston, IL (2014); Big 12 Trombone Conference, Lubbock, Texas (2013); and artist in residence at the BrassChix Festival at the University of St. Thomas (2010, 2011). She has served as the guest conductor of the OMEA District 12 Honor Middle School Jazz Ensemble (2016), OMEA District 14 Honor Middle School Jazz Ensemble (2015), OMEA District 12 Honor Symphonic Band (2014), and has served as an invited guest clinician/adjudicator for the Weekend of Jazz in Beavercreek, Ohio (2014).

A native of Seattle, Washington, Dr. McNamara has earned a Doctor of Musical Arts Degree from the University of Cincinnati, College-Conservatory of Music, a Master of Music degree from Kent State University, and a Bachelor of Music degree from the University of Washington. Before beginning the DMA, Dr. McNamara was the director of bands at Patapsco High School and Center for the Arts in Baltimore, Maryland. Her principal instructors include David Vining, JoDee Davis, Mathew Guilford and Stuart Dempster.