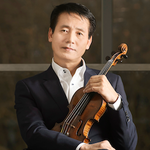 Dr. In-Hong Cha is known as the ‘Maestro in a Wheelchair’, has been called a violinist of delicate and refined musicality. As a Professor of Music at School of Music, Wright State University in Dayton, Ohio, he teaches applied violin, serves as director and conductor of the University Symphony Orchestra, and is concertmaster of the WSU Chamber Orchestra, and leads the Faculty String Quartet.

As a violinist Dr. Cha has traveled throughout the United States and internationally in Russia, Mexico, Canada, Venezuela, Paraguay, Brazil, Italy, Croatia, Germany, Paris, China, Taiwan, Japan, Indonesia, Saipan and Korea.  His performance and interview as a special guest at The Crystal Cathedral in California has been televised worldwide.

As a chamber musician he has studied with the La Salle Quartet for four years, and served as the first violinist in the Bethesda String Quartet, a group that has performed together professionally for more than twenty years.

His first debut recording as a conductor was with the St. Petersburg Philharmonic Orchestra in Russia, which was released by Sony/BMG of Korea and second recording with Venezuela Symphony Orchestra, has been nominated for 2017 Latin Grammy Awards and 2018 Pepsi Music Awards (Awarded in Two Categories: Best Album of the Year, Best Artist of the Year)

His published autobiography, “Beautiful Man and Beautiful Success” (2003) and “Wheelchair is My Wing” (2012), led to Dr. Cha’s fame and to the production of two documentary films by the Korea Broadcasting System (KBS).  He was also honored to receive the Korean Presidential Award for the most distinguished Korean living in a foreign country.

Dr. Cha earned his doctoral degree in orchestral conducting at University of South Carolina and holds degrees in violin performance at Brooklyn College, City University of New York and College-Conservatory of Music, University of Cincinnati.

He plays a Joseph Gagliano violin made in Naples, Italy in 1769.