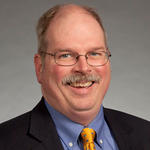 February 2006. Grandview Family Practice Reunion. "Bioterrorism in Dayton: Where Are We?"

Peter Rosen, M.D., reportedly said, "Being program director is the best job in emergency medicine." I would strongly endorse that statement! The opportunity to work with a great group of residents each year is the thing that gets me out of bed each day (or night).

I have always thought of myself as something of a Renaissance man. I'm interested in learning something about most everything, which is likely why I'm attracted to emergency medicine. I enjoy reading (Bernard Cornwell and Jack Whyte are a couple of my favorites), cooking (everything from Italian to Cajun) and travel. I've been married for 22 years to Judy Masset-Brown, M.D., a community pediatrician. But, we met and were married before either of us entered medical school! Below, you see us on a recent trip to Venice.