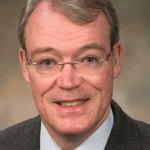 Dr. Ebert was the program director for the Master of Public Health degree program before becoming department chair in 2015. In the public helath and prevention space, he continues to serve as a member of the National Board of Public Health Examiners, and chairs the Governing Board for the American Journal Preventive Medicine.

Dr. Ebert's clinical practice continues during his retirement.  Having served as Lead Physician for the Lipid clinic at Dayton Children's hosptial from 2005 through 2018, he continues to practice pediatrics part-time at Daytoin Children's, specializing in cholesterol disorders of children.

He holds the Graduate Certificate in Health Care Management, has done advanced course work in operations research and biostatistics at Case Western Reserve University, and has completed the Carnegie Mellon University program in executive leadership. He was enrolled in one of the final W. Edwards Deming seminars in 1992, and taught Deming management and quality improvement for several years.

Dr. Ebert is a retired colonel in the United States Air Force. While in the Air Force, Dr. Ebert served as chief of medical staff and commander of medical operations at Wright-Patterson Medical Center. He played a leading role at Wright-Patterson in the rollout of the federal military managed care transition known as TRICARE, participated in the implementation of three different electronic medical information systems, and traveled as a surveyor with the Joint Commission on Accreditation of Healthcare Organizations. He also served as director of medical education for seven years, and participated by invitation in the Department of Defense’s Healthcare 2020 strategic planning group in 1995-1996.

Dr. Ebert is a Fellow of the American Academy of Pediatrics (A.A.P.) and a past president of the Uniformed Services Chapter of the A.A.P. He is a member of the Society for Adolescent Medicine and the American College of Physician Executives. His clinical credentials include board certification in pediatrics and adolescent medicine.

AAMC Report VIII – Contemporary Issues in Medicine: The Prevention and Treatment of Overweight and Obesity; included under “Examples of Innovation,” 2007, pp. 10-14.
“Hepatitis B and YOU”. 1995 (Distributed by American Academy of Pediatrics)