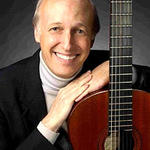 Jim McCutcheon, faculty associate in guitar, is listed on the Ohio Arts Council Touring Roster and the Ohio Arts Council Teaching Roster. He holds a B.S. in physics from the University of Dayton, a B.M. in Guitar Performance and a M.M. in Music Education from Wright State University, and has taught at WSU since 1978. Because of his college teaching career, his extensive work with schoolchildren K-12 and the success of his music store/teaching facility, McCutcheon Music, which features over 50 professional music teachers for hundreds of students each week, Jim was awarded the 2017 Ohio Governor's Award for the Arts in Arts Education.

In 1991, he was the first recipient of the WSU Music Department Distinguished Alumni Award for his achievements as a musician, music teacher, and arts advocate. He also received the 1992 WSU School of Graduate Studies Outstanding Alumni Award.

He received two Montgomery County Culture Works Individual Artist Fellowships for composition, a Parents’ Choice Foundation Silver Award for his CD “A Day with the Guitar Man” as well as a Recommended Award for “Guitar Man Goes to School.” Because of his long-standing work with the Muse Machine, he received their Prism Award. He was inducted as a Friend of the Arts in Sigma Alpha Iota and was recently inducted into Phi Mu Alpha as an honorary member.

He has written several method books on guitar instruction, numerous compositions, and several articles for guitar journals in the USA and England. He currently reviews recordings for Soundboard, the quarterly publication of the Guitar Foundation of America.  as well as The American Record Guide. He has produced a weekly classical guitar program, “The Intimate Guitar,” on Dayton Public Radio for over thirty years. He is Guitar Advisor to the National Federation of Music Clubs, and current president of the Dayton Classical Guitar Society.