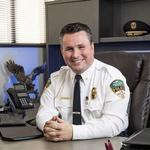 Kurt Holden is a respected university law enforcement professional and executive leader in the policing community. Kurt currently serves as the Director/Chief of Public Safety of Wright State University where he oversees the Police Department, Parking Services, Customer Care Center, Dispatch Center, Emergency Preparedness, and contract security for special events on-campus. In addition to this position, Kurt is a 2-time alum of Wright State University where he's earned his Bachelor degree in Organizational Leadership and Master degree in Leadership Development. Kurt also serves on multiple committees to include: Student Concern Committee, President’s Inclusive Excellence Committee, Staff Senate, Welfare & Policy, Compliance, Commencement, and as a volunteer member for the university’s Independent Scholars Network which is a program that was created to bridge the gap for student success for emancipated foster youth entering into college.

Kurt began his career in 2009 at Wright State University and has since served on the Bike Patrol Unit, Crime Prevention Unit, K9 Unit, Field Training Program, and a First Line Supervisor. Kurt rose through the ranks where he eventually became police Sergeant and later moved to the Administrative Division where he served as the Administrative Sergeant before being promoted to the rank of Lieutenant. Once promoted to the rank of Lieutenant, it was evident that Kurt had talents and the ability to understand how to streamline safety services and he always demonstrated the importance of community engagement and community policing by being student-centered. In December of 2021, Kurt was promoted after a “National Search” to the Director of Public Safety where he was tasked with revamping the university’s police department into a comprehensive Department of Public Safety. In addition, Kurt serves as an adjunct instructor/faculty for Criminal Justice & Leadership courses and has served as a public speaker and panel member for At-Risk Youth. Kurt has a passion for community policing and community engagement, but his true passion is working with youth and finding solutions and equitable outcomes for foster youth. Kurt's passion comes from his time as a child where he was in foster care throughout his childhood until he aged out of care.