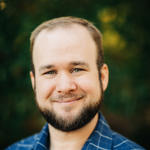 Before returning to Wright State to work on his Master of Music in Instrumental Conducting degree, Matthew Weaver taught band in the Mt. Healthy City Schools district in Cincinnati where he ran the elementary band program and assisted teaching music students at all ages in the district. Matt earned his teaching license through a post-baccalaureate program at the Ohio State University in 2016 and earned his Bachelor of Arts in Music degree from Wright State in 2013. He attended The Conductor’s Institute at Bard College in 2014 and, while teaching private trumpet, horn, baritone, trombone, and piano lessons, Matt played trumpet in various community ensembles around Columbus, Ohio. Matt has also worked as a marching band tech and drum major instructor at various schools and for many years, mostly in Tennessee where he grew up.

Matt is the director of the Wright State Raider Pep Band, the only athletic band at Wright State. Under his directorship, the band had seen an increase in recruitment before and during the COVID-19 pandemic, completed its first fundraiser, developed its own branding and graphic, and completed a transition from music binders to individual music flip books. He also teaches the introduction to conducting class, which teaches aspiring conductors and educators the foundational aspects of conducting technique.

Matt lives in Cincinnati with his beautiful wife Erin and two sons Milo and Remy. There is a third son, Wicket, but he is a dog.