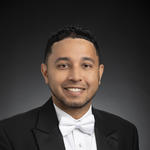 Dr. Nathan Nagir comes from the twin isles Republic of Trinidad and Tobago in the Caribbean. There, he is in demand as a conductor, accompanist, vocalist and educator. Having worked with several children's, youth and adult ensembles, he has led many of them to success in competitions throughout the nation. He has worked with many primary and secondary schools, accompanied and directed the St. Augustine Girls' High School choir and formed the student-staff/faculty choir at Hillview College. He served as the National Music Director and Conductor in 2012 for the National Convention of the Presbyterian Church of Trinidad and Tobago. As a solo artist, Nathan has won several prizes and competitions for best vocal and choral performance. His personal choir—Harmonies Aloud—was selected to perform for various state functions and several times at the Diplomatic Centre and Office of the Prime Minister.

In the of Spring '22 Nagir graduated from the Butler School of Music at The University of Texas at Austin where he earned the Doctor of Musical Arts degree in Choral Conducting under the instruction of Drs. James Morrow and Suzanne Pence.

While at the Butler School of Music, he served as:

His Master of Music in Choral Conducting is from Texas State University where he studied with Drs. Jonathan Babcock, Joey M. Martin and Craig Hella Johnson. Dr. Nagir also holds a Certificate of Music in Steelpan and a Bachelor of Arts in Musical Arts from the University of the West Indies.