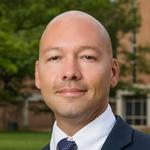 Dr. Pollock earned his Ph.D in History from Harvard University (2006), where he received several teaching awards, including the Thomas T. Hoopes Prize for senior thesis advising and the Stephen Botein Prize for teaching in History and Literature.  He has also taught at Yale University and the University of New Haven, and was Postdoctoral Fellow at the Harriman Institute for Russian, Eurasian, and Eastern European Studies at Columbia University (2007).  Since joining the Department of History in 2008, he has received recognition for teaching excellence in General Education and Writing across the Curriculum.  He was the 2013 Phi Alpha Theta Outstanding Faculty Member (Department of History) and received of the College of Liberal Arts Outstanding Teaching Award for 2015.  In addition to teaching in traditional classroom settings, he has designed and successfully taught asynchronous and synchronous online courses at every level, and has advanced the university's mission to engage in meaningful community service by teaching service‐learning courses in partnership with Dayton's Thurgood Marshall High School.  He chaired the University Undergraduate Curriculum Committee and the Faculty Senate Taskforce on Distance Education, served as the inaugural Faculty Director of the Center for Teaching and Learning (2014-18), and represented the College of Liberal Arts on Faculty Senate (2012-2018).  His current research focuses on the history and memory of Russia's 1812 campaign against Napoleonic France.  He was recently tapped to lead Wright State Online, a new strategic initiative to oversee the production of best-in-class online courses and the development of a comprehensive elearning strategy for the institution.

The West and the World since 1500 (including synchronous and asynchronous online, service-learning intensive, and SCALE-UP sections)

(co-authored with Sheri Stover) "Building a Community of Inquiry and Analytical Skills in an Online History Course," International Jounral of Teaching and Learning in Higher Education 26: 3 (2014): 393-403.

“‘Thus We Shall Have Their Loyalty and They Our Favor’: Diplomatic Hostage-Taking (amanatstvo) and Russian Empire in Caucasia,” in Brian J. Boeck, Russell Martin, and Daniel Rowland, eds., Dubitando: Studies in History and Culture in Honor of Donald Ostrowski (Bloomington: Slavic Publishers, 2012), pp. 139-163.

“‘As One Russian to Another’: Prince Petr Ivanovich Bagration’s Assimilation of Russian Ways,” Ab Imperio: Studies of New Imperial History and Nationalism in the Post-Soviet Space, no. 4 (2010): 113-142.

“Historians and Their Sources: Discourses of Empire and Islam in Eurasian Archives,” Ab Imperio: Studies of New Imperial History and Nationalism in the Post-Soviet Space, no. 4 (2008): 234-252.

“Russian National Identity in Imperial Russia?  The Case of Prince Bagration,” After the Storm: The Year 1812 in the Historical Memory of Russia and Europe, German Historical Institute, Moscow, Russia, May 28-30, 2012.

"The Policy and Practice of Religious Toleration in Northern Caucasia in the Age of Catherine the Great," ASEEES National convention, Los Angeles, CA, Nov. 19, 2010.

Presenter, "'The Dumbest Generation'? The Promise and Perils of Growing Up Online," First Weekend Institutes, Wright State University, September 4 and 5, 2010.

Member, World History and Western Civilization Board of Advisors, McGraw-Hill (2010)

Peer Review/Referee, Proceedings of the Ohio Academy of History (2009-10)

Panel chair: “Gender and Empire in the Caucasus,” American Association for the Advancement of Slavic Studies (AAASS) National Convention, Nov. 2008

Conference organizer, “Russia and Islam in the Archives of Eurasia: An International Workshop,” The Harriman Institute, Columbia University, Dec. 1, 2007