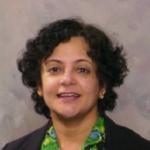 Dr. Sharmila Mitra Mukhopadhyay is Emeritus Professor of Wright State University (WSU).  She served as Professor of Materials Science and Engineering at WSU until Dec 2019, and is currently Director of Frontier Institute of Research in Sensor Technologies at University of Maine.  At WSU, she was founding Director of the National Academies - Grand Challenges Scholar's Program and of their earlier Center for Nanoscale Multifunctional Materials. She had received several awards, including the Excellence in Research Award (2004), the Outstanding Faculty Award (2011), and the Trustees' Award for Faculty Excellence (2011), which is the highest award given by the WSU to a faculty member.  Mukhopadhyay obtained her B.S. and M.S. degrees from Indian Institute of Technology and Ph.D. from Cornell University. In 2016, she was selected as Jefferson Science Fellow by the National Academies of Science Engineering and Medicine.  In this capacity, she served as the senior scientific advisor in the Bureau of Economic and Business Affairs, where she used her scientific expertise to create linkages between cutting-edge technical innovations and governmental entities focused on economic development. She has received the Albert Neilson Marquis Lifetime Acheivement Award, and is an elected Fellow of the American Ceramic Society.

Dr. Mukhopadhyay's academic focus has been at the crossroads of nanotechnology, sustainable engineering devices, and forward-thinking STEM education. Current active projects encompass the following areas: design of compact and reusable nanomaterial architectures for energy, environment, and biomedical applications; fundamental investigation of surface and interface phenomena; and promotion of multidisciplinary engineering education models. Recent research accomplishments include creation of novel bio-mimetic hierarchical structures in robust reusable devices that utilize the benefits of nanomaterials while minimizing their environmental risks. These materials have, to date, resulted in a new generation of catalysts, energy storage materials, antibacterial surfaces, biosensors, and bone/muscle tissue scaffolds. Her work has been featured in over a dozen media releases, such as the Homeland Security News Wire, AzoNano, PhysOrg, Dayton Daily News, Ceramic Bulletin and Dayton Business Journal. She has published over 150 papers, books, chapters and reports. Additionally, she has obtained and directed over forty-five research grants from a wide variety of federal and state sponsors, such as NSF, DOE, AFOSR, AFRL, NASA, EPA, and OBOR, as well as industrial sponsors, such as P&G. Dr. Mukhopadhyay has also organized several national and international symposia, and serves on editorial boards of journals, on review panels of funding agencies, and on executive committees of several professional societies.

Mukhopadhyay_CV.pdf 599 KB
Is this you? Log in to update your profile.