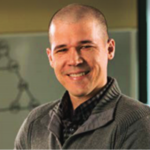 ON TEACHING: Dr. Doom would not mind being remembered as someone who spent "too much effort" on his teaching. Dr. Doom is an internationally recognized educator and was awarded the IEEE-CS 2018 Computer Science and Engineering Undergraduate Teaching Award "for tremendous contributions to Computer Science and Engineering through a balanced career incorporating research, mentoring of students, curriculum and pedagogy development, and service". He was honored with the University's top teaching award and the position Robert J. Kegerris Distinguished Professor of Teaching (2014-2017), was awarded an Outstanding Engineers' and Scientists' Award (Education) by the Affiliate Societies Council of Dayton (2015), and was a Southern Ohio Council for Higher Education's (SOCHE) awardee for Excellence in Teaching (2014). Dr. Doom served on the Faculty Advisory Board for WSU's Center for Teaching and Learning (2014-2016) and regularly shares teaching techniques developed through formal training activies including the Ohio Teacher's Excellence Program (OTEP, 2001), the National Effective Teaching Institute (NETI, 2002), and AAC&U's Teaching to Increase Diversity and Equity in STEM (TIDES, 2015-2018) programs.  Dr. Doom is a many-time recipient of WSU's student-determined College of Engineering Excellence in Teaching award. Dr. Doom disseminates his educational work through venues including the American Society for Engineering Education (ASEE), the ACM special interest group on computer science education (SIGCSE), IEEE Transactions on Education, and contributions to textbooks. His teaching interests include both undergraduate and graduate STEM courses, particularly undergraduate courses in digital design, computer organization, and computer programming.

ON RESEARCH: Professor Doom is a co-director of WSU's bioinformatics research group and pursues research in the fields of undergraduate engineering education, data science, bioinformatics, and digital/computer systems. His education research focuses on the impact of active learning and culturally relevant teaching on student success in STEM. He applies computational and statistical techniques to identify, retrieve, classify, simulate, characterize, and analyze data from a variety of domains. Much of his research involves the analysis of biological data, including raw instrumentation data, as well as processed DNA sequence, protein sequence, metabolite, or population data. Notable research includes techniques for forensic DNA analysis (cited by the U.S. Supreme Court), improved quantification techniques and Kernal-based binning methods for NMR spectroscopic data, isolation and visualization of translational efficiency biases, characterization and synthesis of 1H NMR spectroscopic data, and knowledge discovery in large biological data sets. He served as chair for the IEEE Task Force (Technical Committee) on Bioinformatics 2007-2009. Dr. Doom has advised graduate research in the Computer Science (Ph.D. and M.S.), Computer Engineering (Ph.D. and M.S.), Electrical Engineering (M.S.), and Biomedical Sciences (Ph.D.) programs at WSU.

ON OUTREACH: In the field of data science, Dr. Doom has served as an expert witness in depositions and in person for courts ranging from the local to Federal level. The results of his studies on forensic DNA data have been used to promote justice in courts throughout the world. His work/opinions in bioinformatics have been disseminated in a variety of archival venues ranging from those for engineers (IEEE/ACM Transactions on Bioinformatics and Computational Biology), for forensic and data scientists (Journal of Forensic Science, Jurimetrics), for legal advocates (The Champion), and for scientists in general (Science). Dr. Doom is a founding partner of Forensic Bioinformatics Services, Inc. - a company devoted to promoting social justice through the automated and objective evaluation of forensic data.  Dr. Doom also serves as a Program Evaluator for the Accreditation Board for Engineering Technology's (ABET) Computing Accreditation Commision  (CAC).