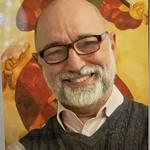 F. Wade Russo joined the faculty of Wright State in 2019.  He worked as musical director & conductor in New York and regionally for 25 years. On Broadway, he served as associate conductor of By Jeeves, directed by Sir Alan Ayckbourn, which was filmed and recorded by the Really Useful Group under the supervision of  Andrew Lloyd Webber.  He also conducted the national tour of The Boyfriend, directed by Julie Andrews.   Wade was a regular music director at the Goodspeed Opera House (27 productions) and the Pittsburgh Public Theatre (15 productions).  Regionally, he has conducted at the Huntington Theatre, Repertory Theatre of St. Louis, Asolo Repertory Theatre, Barrington Stage, Lyric Theatre of Boston, Shakespeare Theatre of New Jersey, Juilliard Repertory Theatre, Gateway Theatre and the O’Neill Theatre Center.  He was cabaret musical director at the Williamstown Theatre Festival for 6 seasons, where he also composed incidental music for The Glass Menagerie with Joanne Woodward.   While in New York, he served as vocal coach for world premiere of Valley Song at the Manhattan Theatre Club written and directed by Athol Fugard and Hymns for Martyred Actors at NYU Tisch School of the Arts written and directed by Tony Kushner.

Wade studied acting at Circle in the Square Theatre School where he later joined the faculty as voice instructor and cabaret director for 9 years. He also was on the faculty of the Juilliard Drama Division as staff vocal coach and accompanist.  While at Juilliard, he was accompanist for master classes conducted by Barbara Cook.  Additionally, he has taught at Point Park University, Emerson College and the National Theatre Institute at the O’Neill Theatre Center.  Prior to coming to Wright, he was on faculty at the Boston Conservatory as musical director/conductor/vocal coach as well as main stage director (Showboat, Strike Up the Band).

At Wright he has music directed productions of The Addams Family, The Theory of Relativity, Mamma Mia and Sweet Charity.  He is also a member of the voice faculty.