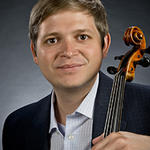 Dr. Kevin Nordstrom leads a busy career as performer, teacher, and scholar. He has performed solo concerts in Canada, Italy, Austria, and China, and has given numerous solo recitals throughout the United States. These performances include recitals at Wright State University, Earlham College, Miami University, The University of Florida, and Ball State University, as well as lecture recitals at the Cincinnati College-Conservatory of Music and the Xi'an University of Arts and Science in Xi'an, China. In Spring 2018, Dr. Nordstrom was awarded a Bronze Medal at the Global Music Awards for his performance of Joan Tower's Wild Purple for solo viola, presented at Wright State University's Schuster Recial Hall.

An active member of the College Music Society, Dr. Nordstrom has given presentations and performances of viola works by György Ligeti, Charles Koechlin, and Marion Bauer at several of their regional conferences in the United States and Canada. In late 2017, his article on the Ligeti Sonata was published in the Journal of the American Viola Society under the title "Transformation and Distortion - The Process of Variation in Ligeti's Sonata for Viola Solo".

In addition to his scholarly work, Dr. Nordstrom is active in promoting and advancing discourse on string music education. He has presented several clinics for the Texas and Ohio Music Educators Association at their professional development conferences in collaboration with his colleague and brother, Dr. Stephen Nordstrom. These clinics focused on developing exercises for the violin and viola, as well as detailed lesson plans for the private lesson teacher. An active proponent of viola ensemble playing, Dr. Nordstrom directs the Wright State University Viola Choir. For this ensemble, he has produced several arrangements of music by Bizet, Verdi, and Tchaikovsky. In early 2018, his viola quartet arrangement of Bizet’s Carmen: Concert Suite No. 1 was published by Latham Music in collaboration with Ludwig Masters Publications. Dr. Nordstrom’s other activities include ongoing service as an Ensemble Database Editor for the American Viola Society, and on the editorial committee for the American String Teacher Journal, published by the American String Teachers Association. He is also the writer/producer of The Great Composers Podcast, found on iTunes and on the web.

Dr. Nordstrom is currently the Adjunct Instructor of Applied Viola at Wright State University and teaches courses in orchestral string methods and non-western music appreciation. He also serves as the Adjunct Professor of Applied Violin and Viola at Earlham College and Indiana University East in Richmond, Indiana. Dr. Nordstrom holds a Bachelor of Music degree from The University of North Texas, and the degrees of Master of Music, Artist Diploma and Doctor of Musical Arts from the University of Cincinnati College-Conservatory of Music. His teachers have included Dr. Catharine Carroll, Masao Kawasaki, Dr. Susan Dubois, and Dr. Kathryn Steely.

In addition to teaching and performing on the viola, Dr. Nordstrom enjoys playing golf, studies in musicology, composing, arranging, and writing about music. His non-musical life often sees him reading volumes on American and ancient history, and spending time with his wife and two daughters.

In my role as a university viola instructor, I am responsible for students with diverse musical backgrounds who share a desire to pursue an education in music and apply it to their lives and careers. My aim as a studio and classroom teacher is to foster a supportive environment where learning is the primary objective of all students as well as myself. I continually seek new ways to communicate and engage with my students so that they learn and grow as people and musicians. I also lead by example, performing recitals and engaging in scholarship so that students can better understand my teaching through my work. By tailoring lesson objectives to each individual, and implementing group activities such as studio classes and a viola choir, I develop students into independent, self-motivated, and confident musicians, who work well with others and will thrive as professionals after graduation.

In lessons, I approach each student as an individual and in a manner which does not suppress their personal characteristics. The most effective way to improve skills is through the study of a wide variety of repertoire, ranging from concertos by Stamitz, Walton, and Bartok to sonatas by Vieuxtemps, Brahms, and Hindemith. Additionally, at every lesson my students are expected to play scales and technical exercises, as well as etudes by Kreutzer, Rode, and Lillian Fuchs among others. While studying this material, students begin to discover how their hands work and what the best way to execute technical challenges is. Even while using the same instructional material across an entire studio, a flexible and imaginative teacher can take into consideration a variety of different learning styles, and formulate new methods that are appropriate to each student in their care. For example, a student preparing for a concerto competition needs a different lesson framework than one getting ready for an orchestra audition. This is the basis for my upcoming OMEA clinic, “Structuring Lesson Plans for a Better Practice Routine,” which focuses on tailoring lesson plans to each student’s learning style and performance needs, providing them with a consistent framework to follow at home.

Weekly studio classes are an integral part of my university teaching. They often take the form of a group lesson, where students perform their current repertoire as well as etudes. Listening activities play an important role in the class as well. For example, I will ask a student to bring to class a recording of a viola work that they enjoy, which they will then describe and everyone will listen to. Often times students will bring recordings of pieces from outside the standard repertoire, which helps to broaden their appreciation for what is available for our instrument.

While playing in the viola choir, students collaborate with one another and establish themselves in leadership roles different from those in traditional chamber music and orchestral settings. Older students have the responsibility of running rehearsals and leading performances. They also serve as mentors to younger students, helping them grow as musicians within a collegial environment. This cooperative effort keeps my students driven both individually and collectively as they strive toward a common goal. Playing in the viola choir is not only a fun activity, but it provides students with additional avenues for performance and personal expression. The experience gained in the viola choir enhances what they learn during lessons, and increases their confidence as performers in a way that will be valuable throughout their careers.